October 5, 1988 is a date that marked the history of Algeria when part of the Algerian youth spontaneously went out into the streets to express a desire, which was incubating in society, for more individual and collective freedoms and political openness. This desire had gained momentum as the Algerian People who was precursor well before the others know the same fate later in Eastern Europe after the fall of the Berlin Wall in 1989.

These demonstrations led to riots that some, notably the Islamists, wanted to use to try to join a process of seizure of power by the instrumentalization of Islam (which is the religion of all Algerians) and through violence.

These events led the Government to respond favorably to this demand of a large section of the population by adopting a new constitution in 1989 which introduces political and economic reforms aimed at opening up the political field to multiparty politics, freedom of press, a more active and participatory role of the civil society and a transition from the directed economy to an economy based on the liberalization of the market and the privatization of enterprises.

This period coincided with the end of the war in Afghanistan, which embodied one of the bloodiest facets of the Cold War between the two blocs (Western and Soviet) and the return of Jihadists in some countries like Algeria, driven by the desire to extend terrorist violence as a means of gaining access to political power. 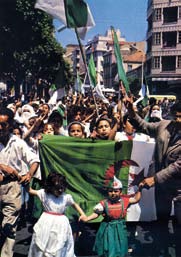 The intrusion of an external body characterized by violent extremism, completely opposite to the ancestral values of the Algerian society united by an Islam of tolerance has had the effect of a nebula that exploits politically the religion to seize the opportunity offered by the democratic opening of the country to take power through violence.
This came in a context of political opening through multiparty, not yet regulated and of economic liberalization hugely impacted by the dramatic consequences of the structural adjustment program of the international financial institutions imposed on a country heavily indebted.
Those consequences produced perverse effects such as the inflationary shock, the impoverishment of part of the population, the shift of activities to the informal sector, the massive flight of the intellectual elite to Western countries, the collapse of production and the explosion of unemployment.
In reality, the extremists took advantage of this pivotal period to try to curb the reforms, to confiscate the future of the Algerians and further weaken the State Institutions that were in transition. That being by diving the Country into a decade of terrorism, referred by Algerians as „The Black Decade“.
The troubles experienced by Algeria during that period of time not only hindered the implementation of the development projects, planned by the Government, but also cost a lot to the population, especially in terms of human lives.

June 20, 2018 Nearly a quarter have no emergency savings

June 20, 2018 Nearly a quarter have no emergency savings