According to that, the Algerian Government focused on developing on long distance connectivity, on both the East-West and North-South axis. The Algerian road network remains one of the densest on the African continent, its length is estimated at 124,783 km of roads, including 5 095 of Highways and motorways. 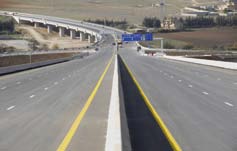 Among the big projects achieved by the Government, the East-West highway that connects East and West borders of the country. With a length of 1,216 km, it passes through 24 out of the 48 provinces. Several segments are under construction to connect the highway to the national roads network, to reach a total of 1,700 km.

The finalization of the Trans-Saharan road, connecting Algiers to Lagos (Nigeria), that crosses several African countries will represent a major achievement for Algeria, which will be connected to Africa through 4800 km of roads, facilitating the transport of passengers and goods to Africa from Europe and the rest of the World.