Algeria has an enormous mining domain that covers an area of 1,536,442 km2, with important conventional reserves and unconventional resources (3rd world position in shale gas) and is one of Europe’s largest pipeline natural gas suppliers and the original and still very active supplier of liquefied natural gas (LNG) worldwide.

The potentialities of Algeria in wind and solar energy are unmatched and might open huge opportunities, including for foreign partners, where the national development plan intends to meet 1/3 of the domestic demand in electricity in 2030 by producing over 22000 MW.

With 875 252 km2, hydrocarbons represent 57% of the national mining domain. The proven hydrocarbon reserves are estimated at 4,533 million Toe (ton oil equivalent) representing 44% of the initial recoverable reserves, of which 1387 Toe are oil and 2745 Toe of natural gas.

It should be noted the significant increase (+ 51%) in primary electricity production (including the hydraulic sector), from 223 GWh to 336 GWh in 2016 compared to 2015, following the launch of production of several photovoltaic power plants achieved within the framework of the National Renewable Energy Program.

In 2016, 13 photovoltaic plants have been commissioned with a total capacity of 180 MW.
The rhythm of hydrocarbons exploration is keeping a continuous pace with 354 km drilled of which 98% were by Sonatrach (the national Oil and gas company) even if the priority has been directed to the development of deposits to boost production.

The distribution of these discoveries by basin, shows that 58% were made in the Berkine basin; the rest is divided between Oued Mya, Amguid Messaoud, Illizi and the basin of Tindouf.

In terms of development drilling, the activity increased by 35% to reach 563,408 meters drilled; This allowed the completion of 196 wells (Sonatrach and associates Associés), compared to 144 wells in 2015. The Commercial hydrocarbon production resumed growth to reach 166.1 M. Toe in 2016. This level reflects a strong + 7.3% increase over 2015, driven mainly by natural gas and crude oil.

The evolution of production in 2016, is driven by the increase in the production of deposits exploited by Sonatrach in own effort particularly natural gas in the region of Rhourde Nouss and some deposits in the regions of Haoud Bekaoui, Stah, Gassi Touil, Touat oil and In Amenas. Sonatrach‘s production in association recorded increases in production, notably the In Salah, El Merk, Bir Sbaa and Bir M‘Sana fields.

The entire territory of the country is covered by wide area network for the distribution of fuel oil, gas and electricity. The transport system of hydrocarbons, whether liquid or gas, covers approx. 15,000 km, including 14 petroleum pipelines and eleven gas pipelines. The transport capacity of the network is approx. 101.32 billion cubic meters of gas, 12.52 million tons of LPG and 79.44 million tons of crude petroleum and condensates. 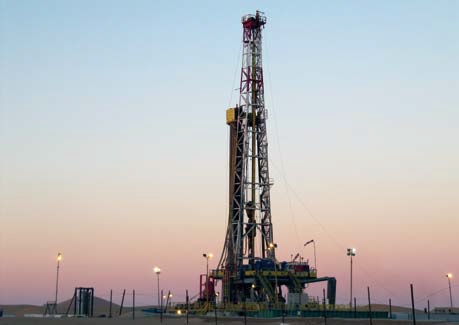 Given that the capacities of hydrocarbons production and exportation are increasing, Algeria plans on developing its national and international network of transport. A new 823 km-pipeline – $ 600 million – is in the process of construction between Haoud El Hamra and Arzew.

1- The Trans-Mediterranean gas pipeline (Transmed, aka Enrico-Mattei), Built in 1983, is a 2,475km-long natural gas pipeline built to transport natural gas from Algeria to Italy via Tunisia and Sicily with a capacity of 66 million cubic meters per day. 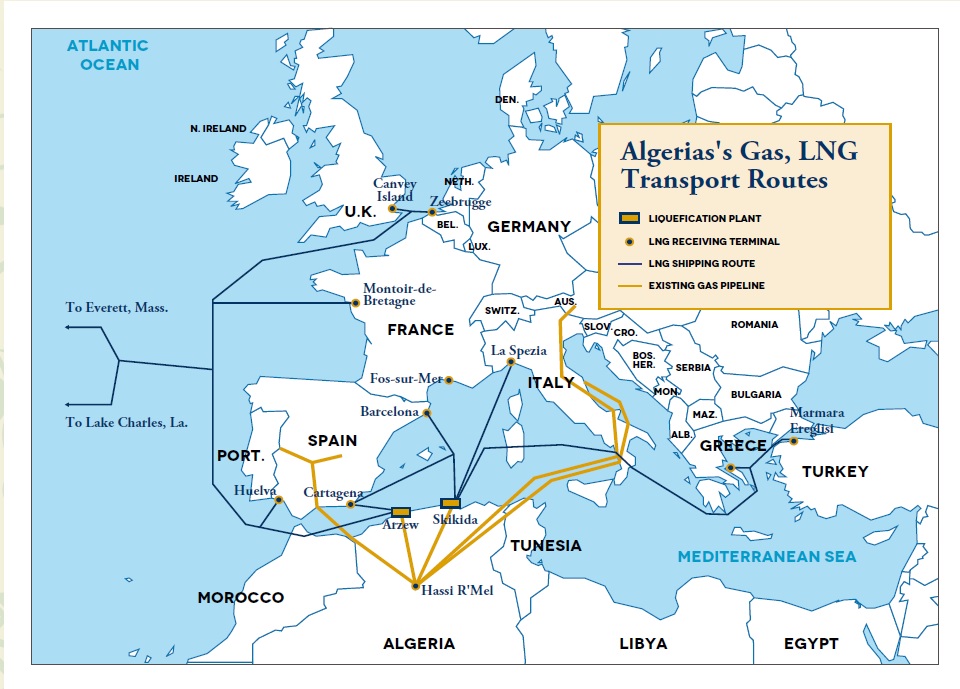 2- The Maghreb-Europe (MEG) gas pipeline, long of 1,610 km, has a capacity of 23 million cubic meters per day. The MEG gas pipeline is operational since 1996. Connected to the Spanish and Portuguese distribution networks, it links the Algerian gas field of Hassi R’mel to Cordoba in Spain via Morocco.

The MedGaz pipeline connecting Beni Saf in Algeria to Almeria in Spain, with a capacity of 11 million cubic meters a day, which can reach a maximum of 44 million m³/d. Addionally, a project for a new pipeline with Italy, long of 1,456 km with an initial capacity of 22 to 28 mscmd, is under discussion. In addition, those gas pipelines are equipped with electric cables in the prospect of supplying electricity to Europe as well. The trans-Sahara pipeline, a huge project connecting Nigeria to Algeria, aiming to supply more gas to Europe, has been discussed between the two countries in virtue of a new partnership for the Economic Development of Africa (NEPAD).

The cost of the 4,129 km of gas pipeline equipped with optical fiber was estimated at $10 billion. It will transport 20 to 30 billion cubic meters of gas. Algeria enjoys huge potentialities in shale resources estimated at 4,940 Tcf, of which over 740 Tcf, close to 21000 billion CM3, are recoverable.

This figure is close to the estimate given by the energy International Agency (EIA) in June 2013 which put Algeria third in the world behind China and Argentina. Taking into account environmental concerns, Algeria has to pay greater attention to water resources management as well as the health concerns of its population. Thus, any engineering, drilling and completion operation, must be designed on a risk-free basis.

With over 40 years of presence in the country, establishing its operations in 1962, GE’s advanced technologies have been an ideal match to support Algeria’s growth aspirations, with over 440 employees. GE has provided more than 450 gas turbines, 340 compressors and 200 pumps to various partners in addition to undertaking the inspection of over 1000 km of pipelines every year.
To date, GE’s technologies have contributed to an installed power capacity of 7,900 MW with an additional 5,600 MW of power generation projects under construction. An active partner in the energy, oil & gas, power and water sectors of Algeria, GE’s sterling accomplishment in the country is the Hamma Desalination Plant, which commenced operations in 2008. A remarkable model in public private partnerships, Hamma Desalination Plant is jointly owned by GE (70 percent), before GE water and the Algerian Energy Company (30 percent), and operated by GE on a 25-year build-own-operate basis with take-or-pay water and sales purchase agreement from the Algerian water authority, Algérienne Des Eaux, and obligations guaranteed by Sonatrach Spa.

A partnership with Sonelgaz, General Electric Algeria Turbines (GEAT) is a new plant to manufacture equipment in Algeria based in Batna that will deliver about 2 GW per year to meet the country’s growing electricity demand, a strategic project demonstrating the commitment of Sonelgaz and GE to manufacture locally steam turbines, gas turbines, generators and control systems.
The facility will increase Algeria’s generating capacity by nearly 70% and create nearly 1,000 jobs for Algerians, including 400 direct skilled jobs and more than 600 indirect jobs within the local supply chain.
The GEAT facility is expected to be ready for the production of power generation equipment by 2018.
Sonatrach and Baker Hughes, a GE company announced a deal in november 2017, to establish a new joint venture company (in which Sonatrach and BHGE have 51% and 49% ownership respectively) to build a $45MM USD oilfield equipment manufacturing facility in the Arzew Industrial Zone. 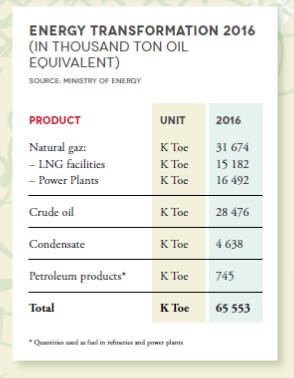 From carrier at its creation in 1963, SONATRACH (National Society for the Research, Production, Transport, Processing and Marketing of Hydrocarbons), has progressively and rapidly deployed throughout the whole hydrocarbon chain to become an integrated company and a group of international dimensions, performing all oil and gas upstream and downstream activities.

The internationalization strategy of its activities alone and / or in partnership has enabled SONATRACH to strengthen its position on the international oil and gas scene, by diversifying its activities on all steps the hydrocarbon chain: Exploration and Production; Pipeline Transportation, Liquefaction, Refining and Petrochemicals, Petroleum Products Marketing, Shipping and Other Services. 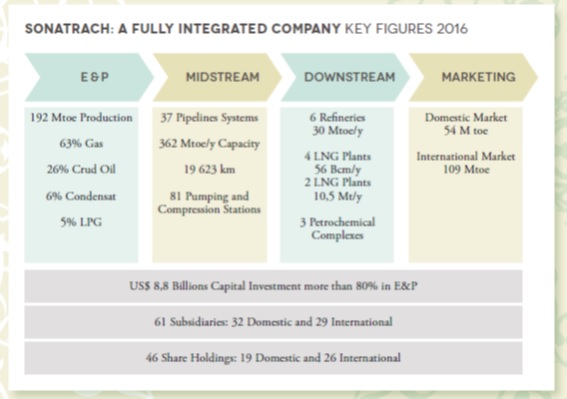